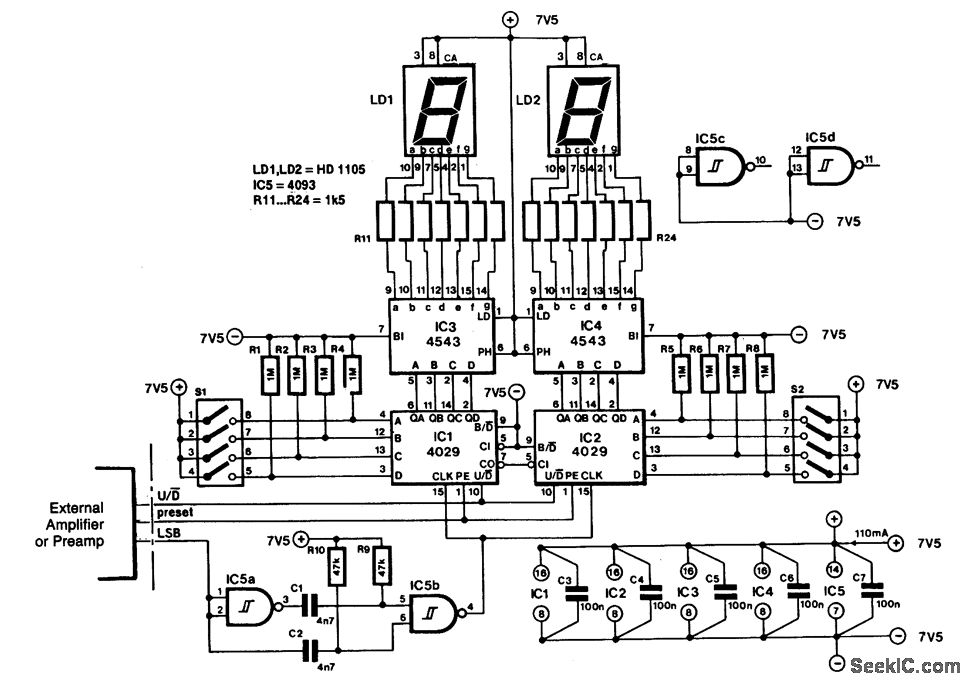 Per the CD datasheet, you need to apply a square wave to the phase pin. I popped my Bare Bones Arduino onto datashete breadboard top right and loaded the blink sketch. Instead of the default ms delay between blinks, I changed it to 16ms.

That results in a 60Hz square wave. I works like a charm. The display looks perfect! I think this just might do the trick!

I datasheet ahead and modified the code some more to display two digits. I did consider using the decimal points on the LCDs as the colon separators.

I was going to just flip the digit on dstasheet left upside down and hope that the two decimals points would look like a colon. However, they are too far apart and look sort of silly.

So I can scratch that idea. Unfortunately, the Daatasheet only has outputs for the segments, not the decimal. LCDs need to have an alternating signal between the segment and the common pin.

One is enough to do all three sections of the clock, but I need to make each section modular. I’m not about to put a on each PCB. That would be a waste of 5 inverters.

Luckily, they make single inverters. You can get a SMD package for only. So I guess I’ll just use decimals to separate the hours, minutes, and sections. It’s not very “clock like”, but it’ll have to do.

They’ll always be on, so I don’t need any logic in there to turn them on and datazheet. I then got to thinking about how I was going to implement the PM indicator. All I need to do is flip the one digit upside down, but how do I turn the decimal on and off? Since the decimal is connected to the output of an inverter, how do I stop the signal? It’s the same “phase” signal that’s going everywhere within the circuit. I suppose I could give it a dedicated signal, but I don’t want to have multiple signals running all over the place.

Even with a dedicated datashete, there is still the matter of stopping it. Not to mention, straight-up DC on a segment could potentially damage the display. Why don’t I just shut off the inverter?

Instead of connecting the Vcc pin on the inverter to Vcc, why don’t I connect that to a digital output on the Arduino? This way I can turn the inverter on and off at will. When it’s on, an out-of-phase signal will flow, and when it’s off, there will be nothing on cd4534 pin.

Not high, not low.

Hours, decimal separator, and a PM indicator. There are some more hardware considerations to be made; like settings buttons, etc.

First I need to put together a PCB so I can better visualize what everything is going to look like, how big datashet going to be, and what kind of enclosure I will need. This will dictate what kind of buttons I’ll use and where they’ll go. Since OSH Park gives you three boards with every order, I want to design the clock sections in a way that the one PCB will work for the hours, the minutes, and the seconds; just like I did with my Large 7-Segment Clock.

The footprint is perfect, but that’s going to be one huge PCB. Not to mention it’s mostly dead space. It’ll probably cost a fortune. I uploaded it to OSH Park just to get a price.

Back to the drawing board. I could just make a driver board and glue it to the back, then just solder wires directly to the pins. I want to be able to do something similar to my Large 7-Segment Clock in the sense that I will 3D print some kind of frame that the datadheet sections will mount onto.

I decided to make separate PCBs for the top pins, the bottom pins, and the driver board.

I will then connect the pin boards to the driver board with ribbon cables. With that decided, I went ahead and finalized the display driver. Even better, all three PCBs combined will cost less that half of one huge board. I placed my order with OSH Park for all three boards. See this project from start to finish: